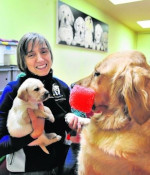 Christine is particularly interested in breeding better guide dogs and founded the European Breeding Network in 2007.

Working together, sharing and learning from each other is something which is really important to her. She has been elected to the IGDF Board in 2004 and was active in various positions, including vice-chair until 2012. Currently she is an IGDF assessor and has previously served as the board-elected chair of the Accreditation Committee from 2012 until 2016.

She was co-opted to the IGDF Board in October 2019, and appointed by the membership for a term of four years at the AGM in September 2020. Christine is Board Liaison for the Accreditation Committee, and Co-Chair of the Education Committee. 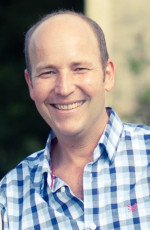 IGDF Board Member
Director of Canine Affairs
The Guide Dogs for the Blind Association, UK

Tim has worked for Guide Dogs since 1985, qualifying as a guide dog mobility instructor in 1989, progressing through a succession of operational management roles before being appointed Director of Canine Assisted Services in 2014. Tim has led a senior team to deliver strategic change projects including a complete re-design of puppy development, dog training and client instruction programmes.

Tim was appointed Director of Canine Affairs in 2020 and now leads on engagement activities with national and international canine/ assistance dog sector partners, seeking to identify opportunities for closer cooperation, such as in the creation of international standards. Tim has a keen interest in progressive dog training, ethics, welfare and the human-animal bond. He has a BSc (Hons) in Applied Animal Behaviour and is currently studying for a MA in Anthrozoology.

Tim has served on the Accreditation Committee and Development Committee and was elected to the Board of Directors in 2018. Tim is also a Board Director of Assistance Dogs (UK). Tim lives in the South of England and enjoys long country walks with his wife and two dogs. 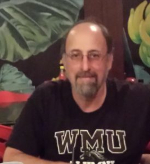 Lukas Franck is a COMS and a Guide Dog Mobility Instructor. He graduated from the State University of New York at New Paltz with a BA in Speech Pathology and Audiology. He began working at the Seeing Eye as an apprentice in 1978.

Leaving the Seeing Eye after eight years he attended Western Michigan University and earned a Masters in Orientation and Mobility in 1987. He re-joined the Seeing Eye’s staff shortly after completing his degree. In 1993 He became a ‘community instructor’, traveling full time across the United States and Canada working to enhance the working relationships between Seeing Eye graduates and their dogs. As a result of his experiences in this capacity he became interested in Environmental Access for people who are visually impaired.

He served as chair of the Environmental Access committee of Association for the Education and Rehabilitation of the Blind and Visually Impaired (AER) and is still active on that committee. He has worked with the National Committee on Uniform Traffic Control Devices to create language leading towards a United States standard Accessible Pedestrian Signal and has worked to create and enhance communication and understanding between Orientation and Mobility Specialists, people who are blind or visually impaired, and traffic engineers.

Lukas is a past winner of the Orientation and Mobility Division’s Sandy Kronick Distinguished Service Award, and the American Foundation for the Blind’s Access Award. He is proudest however of having twice received the Ethel Bender award from Guide Dog Users, Inc.

Currently Lukas is the Senior Consultant for Special Projects for the Seeing Eye. He is a former Assessor for the International Guide Dog Federation, and is also currently on the Development Committee. 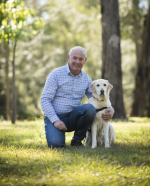 Paul began his career in the dog guide industry in 1984, qualifying as a Guide Dog and Orientation and Mobility Specialist in 1987.

Since that time he has worked in a number of agencies within Australia and throughout Europe. Roles have varied from direct client services to staff training, from operational management to executive leadership. His current role is that of Training Manager with Vision Australia Seeing Eye Dogs.

Paul is currently serving as a member of both the IGDF Education and Accreditation committees. His passion is the provision of quality and innovative dog guide services to people who experience blindness or partial vision. He is proud to be a promoter of ethical, science based training practices, ensuring best outcomes for clients, dogs and the organizations that engage in providing dog guide services.

Paul is also a member of the IGDF Accreditation Committee. 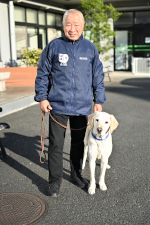 Sam joined Japan Guide Dog Association in 1974 and he has pursued the advancement and innovation of guide dog training technology, as well as the orientation and mobility technology for the visually impaired persons in Japan.

He is currently the head instructor for the Guide Dog Trainer’s School, the first institute founded in Japan by JGDA in April 2004. He has been supervising the education of future guide dog trainers.

International Guide Dog Federation has also been an important part of his life, since the time of its preparation meeting at Royal Leamington Spa, UK in 1986. He made various presentations at the seminar, including the ‘Tandem’ mobility style, where one guide dog is shared between two people, the ‘Ergonomic Bar-type Harness Handle’ and ‘Wearable Device’, and his advice has been sought by many IGDF member schools.

Through his position as an assessor since 1994, he has been contributing to the international quality improvement of guide dogs and client services.

Contact Us
Back to top
Menu
© 2022 International Guide Dog Federation. All Rights Reserved.
We use cookies on our website to give you the most relevant experience by remembering your preferences and repeat visits. By clicking “Accept”, you consent to the use of ALL the cookies.
Cookie settingsACCEPT
Manage consent